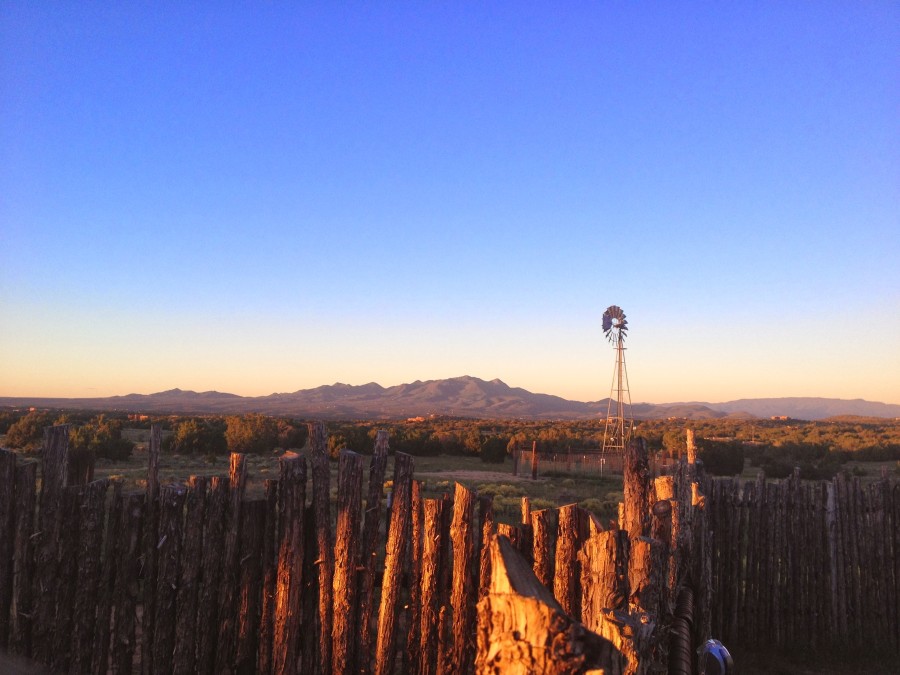 it’s been three years since i was back in new mexico. well, that is until three weeks ago, when i finally went home. bill was working out of his houston office, so i took the chance for a couple of days visiting my family and eating lots and lots of green chile.

if you aren’t familiar with new mexico, the first thing you should probably know about is our food. we have very special food. it is not quite mexican, it is not quite native american and it is not quite spanish, but it is definitely a mix of all three. and here’s one for your next pub quiz: new mexico is also the only state in the US to have an official state question, which is, “red or green?”. this refers to our incredible chile sauces, the green derived from unripened, roasted chile peppers and the red from ripened peppers of the same plant.

i stayed the first couple of days with my mom in my childhood home – a stately little adobe house that sits on a good few acres of lovely, scrubby high desert land with views of the mountains in every direction. we ate at a few of my favourite spots. the first morning was a breakfast of huevos rancheros (eggs with beans, cheese, corn tortilla and chile sauce) at san marcos cafe.

growing up, this was the only restaurant local to us, as our house is rurally 20 miles south of santa fe. we called it either sue’s (in reference to the owner/chef, susan macdonell), or ‘the feed store’, as there is an actual feed store connected to the back where local ranchers buy everything from hay to halters to live chicks in the spring.

while in santa fe, i also did some touristy stuff – not something most locals get up to. on santa fe’s plaza, most days local native americans from various tribes set up on blankets under the long portico outside the historic palace of the governors (now the museum of new mexico) and sell handmade jewellery, much of it turquoise. growing up in new mexico, wearing turquoise was always something for tourists, but now living away for so long, i really wanted a nice piece to remind me of home. i came away with lovely necklace stone and silver and turquoise bracelet made by a navajo craftswoman – so beautiful.

time goes a lot slower in new mexico than it does in london. there is time to just sit and watch the sunrise. and the sunset. there is the space of the day when dusk falls over the house silently like a blanket of snow. there was time to enjoy that quiet, which i realised i miss a lot. even when london is quiet, the city still has a faraway rumble. and, not least, i got to play with my horsie, ren’ai, who lives at my mother’s house and is a complete dote. some readers here may not know about my past life as a horse trainer, which i did for many years before i became a world traveller and writer.

after not nearly enough time with mom, it was off to a packed day of breaking bad tourism in albuquerque, which is 60 miles south of santa fe, for a work article. my stepdad was the lucky candidate to drive me around the city, where we went from breaking bad location to location, seeing and photographing in the space of a few hours walter white’s house, the infamous “a-1 car wash” (actually the octopus car wash on menaul and eubank) and many others. all of that driving called for a hearty lunch, so we had to stop at my favourite restaurant on god’s green earth: duran’s.

duran’s has two locations, though the original is literally a cafe in the back of a pharmacy in old town albuquerque where little old hispanic ladies in hair nets cook some of the meanest new mexican fare ever, including homemade tortillas. their second location – duran’s station – opened a few years ago and has become a rival to the original and one much easier to reach, though for atmosphere i still prefer the original. either way, the food is INCREDIBLE and we stuffed our faces.

that afternoon, i was scheduled for a press visit to routes rentals for a breaking bad-themed bike tour. perhaps a bit ill-advised after such a large lunch, but the prospect of beer at one of my favourite albuquerque breweries helped me press to the end. actually, heather and josh (partners and owners) gave one hell of a tour, showcasing the downtown filming locations (such as jesse’s house and tuco’s hideout) and bringing a laptop so we could watch the scenes at their filming locations. the tour ended with a sampler of marble’s heisenberg dark, which i will talk more about on brew travel.

by the end of the day, i was wrecked, but made two last stops: one into the candy lady, to buy samples of the prop ‘blue meth’ used on the show to bring back to colleagues in london, and two into a kelly’s liquor store to buy a nice bottle of wine to bring to my aunt’s house. my aunt just so happens to be a regular customer of saul goodman’s nail salon (breaking bad reference), so we stopped in for a quick pedicure and to chat with the owners about what it was like to have breaking bad filmed in their store.

the evening was topped off family-style, with all of my paternal aunts and uncles turning up for green chile-topped pizza and many bottles of wine on my aunt’s beautiful back patio, overlooking the sandia mountains. there is nothing better than sipping a nice cab in the crisp desert air with family and laughter (and some good old fashioned egenes arguing) all around.

this is part 1 of what will be a 3-part series.