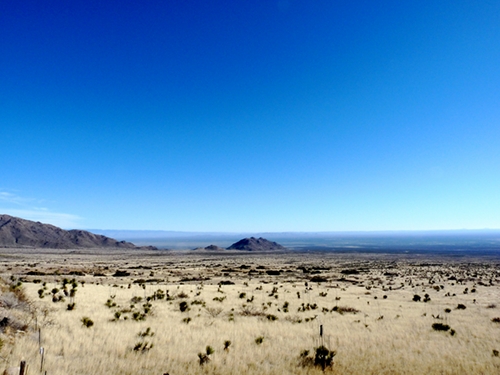 today’s photoblog was snapped at the crest of san augustin pass in the organ mountains near las cruces in southern new mexico.  here we are looking east toward the white sands missle range, where all you can see for leagues are cactus and the bluish hues of mountains and beyond. i love new mexico.

i am not a huge fan of new year’s eve celebrations. when i was young, and my whole world revolved around one single place and time (then, santa fe), i believed that something magical happened when the clock struck midnight on new year’s eve. i watched dick clark count down the seconds, and then the ball would drop and fireworks would blast off with huge colorful bangs. it was a new moment each year. a way to recharge, renew and start life over. in the life of a teenager, a huge accomplishment.

now, years and miles later, i know better. the illusion of starting anew is just that. because, when the clock strikes midnight in santa fe now, it’s already 1 am in texas, seven hours into the new year in dublin, and china has already seen most of january 1st. so, i don’t take much stock in new year’s. and i don’t make resolutions.

that said, i’ve decided on this new year’s eve, as we delve out of the naughties and into the tens, to recount in photos the only two new year’s celebrations that were in any way memorable for me between 2000 and 2009. END_OF_DOCUMENT_TOKEN_TO_BE_REPLACED

2009 has been a busy year of traveling, traveling and more traveling. some of it was travel for pleasure, other trips were induced more from need to get away. in fact, in many ways, 2009 was a banister year for me.

‘this is china, a guidebook for teachers, backpackers and other lunatics’ was finally released in july, after a long, unfortunately drawn out contract finally came to a painful demise when my publisher, duffie books, went bust. i got my first real foray into the world of travel writing at sites like the circumference, your 24 and unearthing asia.  this time last year, bill and i were surviving a cold, wet irish winter in our tiny basement flat in rathmines. now we are spending our days writing and computing from a cozy albuquerque apartment. i guess it takes a year to make a travel writer. [tweetmeme] END_OF_DOCUMENT_TOKEN_TO_BE_REPLACED

one thing that has often struck me upon returning to the U.S. after time abroad is the size of the vehicles. nowhere else on earth do the size of the cars match those of the united states. i distinctly remember after a year and a half in china and 2 weeks in new zealand following it, i landed in san francisco and nearly had a heart attack as my friend’s teeny ford escort buzzed down the highway with huge pickup trucks screaming by.

END_OF_DOCUMENT_TOKEN_TO_BE_REPLACED

after all these years, i have ended up back in new mexico. what an interesting irony life is. i suppose perhaps the most ironic thing of all is that i could not be happier to be here. enjoying the blue blue sky and the warmth of the desert sun on my face. the sweet lack of humidity. and green chile, oh yes, green chile. there is so much to love about new mexico. END_OF_DOCUMENT_TOKEN_TO_BE_REPLACED

i am a crab. i am so crabby about the united states it’s not even funny. despite a more or less wonderful trip to the US this past month, i still have not a good word to lay down about it and am constantly compelled to complain about the place. in an effort to affront this tendency and look on the brighter side, i’ve decided to compile a top 8 list of great things we did on our august holidays in the states. how ‘bout that? END_OF_DOCUMENT_TOKEN_TO_BE_REPLACED

after emailing my vote in yesterday morning (irish time) and staying up ’til 1:30 am over a glass of wine to watch the states turn colours on CNN.com with bill, i woke this morning happy to see that we have a new president-elect, and it’s not john mccain.

herein lies the end of my political dialogue. i have thought a lot about this today and decided that, although i have oft been loathful of my americanness in the past, there is no reason why today should be any different from any other day. the fact is that the united states is a divided country, and i stand one one side of the divide. this year, and for the succeeding 4, we will have a president and a state who lead the way i want them to lead (more or less). but there is no less history in any election before this one, as the pendulum swings left, so shall it again swing right sometime down the road. from kennedy to nixon and ford to reagan to bush, to clinton to bush to obama. every four or eight years, the same pattern has repeated itself since april 30, 1789, when george washington took office as the first president of the united states of america. END_OF_DOCUMENT_TOKEN_TO_BE_REPLACED

i should like it find it strange if for just one day a quick-turned twenty- four hours, my mind would not stray to you and to all of our whatmightvebeens. * * * * #evening #night #venus #stargazing #nightsky #astrophotography #twinflame #twinflames #1111 #longing #poetry #poem #poet #poetrycommunity #poetsofinstagram #poetryofinstagram #poetrylovers #unrequitedlove